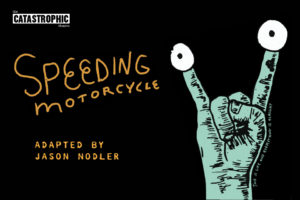 A Catastrophic favorite returns! The rock opera is playing June 28 – August 4 at THE MATCH.

SPEEDING MOTORCYCLE takes audiences deep into the astounding, hilarious, and heartbreaking world of one of America’s most compelling cult musicians. The story concerns a man named Joe Boxer—played by multiple actors to echo his fractured personality—who loses his mind when he’s rejected by the woman he loves so she can marry an undertaker and become his assistant. Joe decides the only way to be with her is to die, so she’ll prepare his body for burial. That’s the first half of the story: He resolves to die. The second half is his afterlife, after the funeral. What does he do next?